You have spent many years building real, mission-critical applications that run your business on mid-range machines. And now applications need to be modernized with rich Windows and Web interfaces to broaden their appeal to new users, reduce training costs and decrease user errors. Modernization, poses a dilemma for your developers. They don't want to reinvent applications and also don't just want an exact replica of the 80x24 screen that replaces a terminal with a Web browser.

The good news is the technology now exists to move applications forward and enhance developer productivity. Using Delphi/400 products, you can build Rich Windows Interfaces (RWI) and Rich Web Applications (RWA) with a few simple clicks of a button. Using component-based development, you can interact, call, or expose any data or program on the i box with just a few components and then expose the information with data-aware components to speed development.

What is your AS/400 Or System i challenge?

RPG, COBOL and C developers find Delphi easy to use

With Delphi/400, component-based development is easy to learn. It's built on an object-oriented, Pascal language that has been tested for 20+ years. If you are a developer who has used the common languages for IBM i development in the past (including RPG, COBOL and C), then you should find it easy to learn Delphi. And with the built-in Visual Component Library, building applications has never been easier.

Here is a typical output from an RPG program that contained around 500+ lines of code.


That same type of example as shown below with full editing of columns and full write-back to the i box usng zero lines of code. 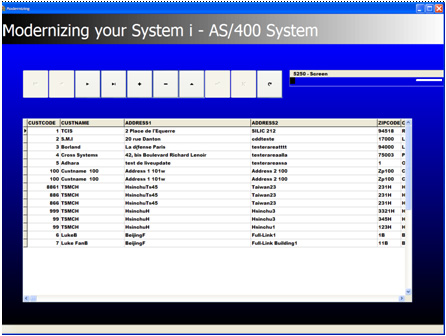 Extending development years on the i box

With Delphi/400 you don't need to abandon years of development with System i. You can embrace and extend development by Web-enabling your existing applications through exposing the underlying functionality to a Web application. Delphi/400 uses components to build systems. Entire functionally can be encapsulated into a simple component, and can easily be manipulated through property/attributes and method/operations. Consider the time it would take to write a RPG program to access a database and generate a Microsoft Excel based file after a few calculations are done. With Delphi/400 this can be done with five components and can be exposed in a Web service, Web page, or a Windows application in less than 10 minutes.

You are not limited to just one approach or one way to accomplishing a task. Delphi gives you the ability to build applications that will take your company into the future. Easily create and expose application logic with Web services that can be used by other products within your company or expose that functionality to your partners.

Delivering iSeries or AS/400 applications to the Web

Delphi/400 for PHP delivers rich PHP powered Web-based user experiences with the same component-based development found in Windows Delphi 400. Instead of opening a notepad to create PHP, you enter a rich, integrated development environment where you can easily build, run, test, and deploy PHP based applications. Advanced tools like CodeInsight™ help new developers by exposing methods and parameters while the code is being constructed.

Delphi/400 is a combination of Delphi or Delphi for PHP from Embarcadero plus Delphi/400 ClientObjects from SystemObjects.