TachoEASY GmbH is the market leader in Germany and Austria for telematics systems in the area of fleet management with over 40,000 customers. Initially, TachoEASY started with the software Tacholog® developed in Delphi that operated as a data-management tool for the digital tachographs in trucks. Followed with the implementation of the all-in-one dispatching and telematics solution BlueLogico® and the TEOS® app.

Thanks to the FireMonkey multiplatform framework, the TachoEASY project and code base were used to develop not only the Windows version but also the macOS version, as well as adaptations for Android and iOS. By combining desktop, mobile apps, and data access via the web, BlueLOGICO has combined the best of all worlds and, with Delphi, offers a high level of technology security for years.

Disposition and telematics for the truck fleet

TachoEASY GmbH is the market leader in Germany and Austria for telematics systems in the area of fleet management. Under Managing Director Gerhard Mairhofer, the company currently has over 40,000 customers and has located more than 10,000 trucks across Europe with its telematics systems.

Initially, TachoEASY started with the software Tacholog® developed in Delphi that operated as a data-management tool for the digital tachographs in trucks. The software is designed to automatically comply with the legal obligations for the company in monitoring the driving, working hours, and rest periods of the drivers.

A big step followed with the implementation of the comprehensive, all-in-one solution BlueLogico® for dispatching and telematics in the area of transport logistics.

At the beginning of the BlueLOGICO® development in 2012, the company already relied on the FireMonkey technology (FMX). At that point, it was still a risky business decision to rely on the new framework of Delphi XE2. But due to the long-standing trust in the Delphi technology and in the company Embarcadero, it was possible to realize a sensational and extremely broad multiplatform project, despite some hurdles during the release changes. It is not without reason that TachoEASY has become the market leader in the industry. 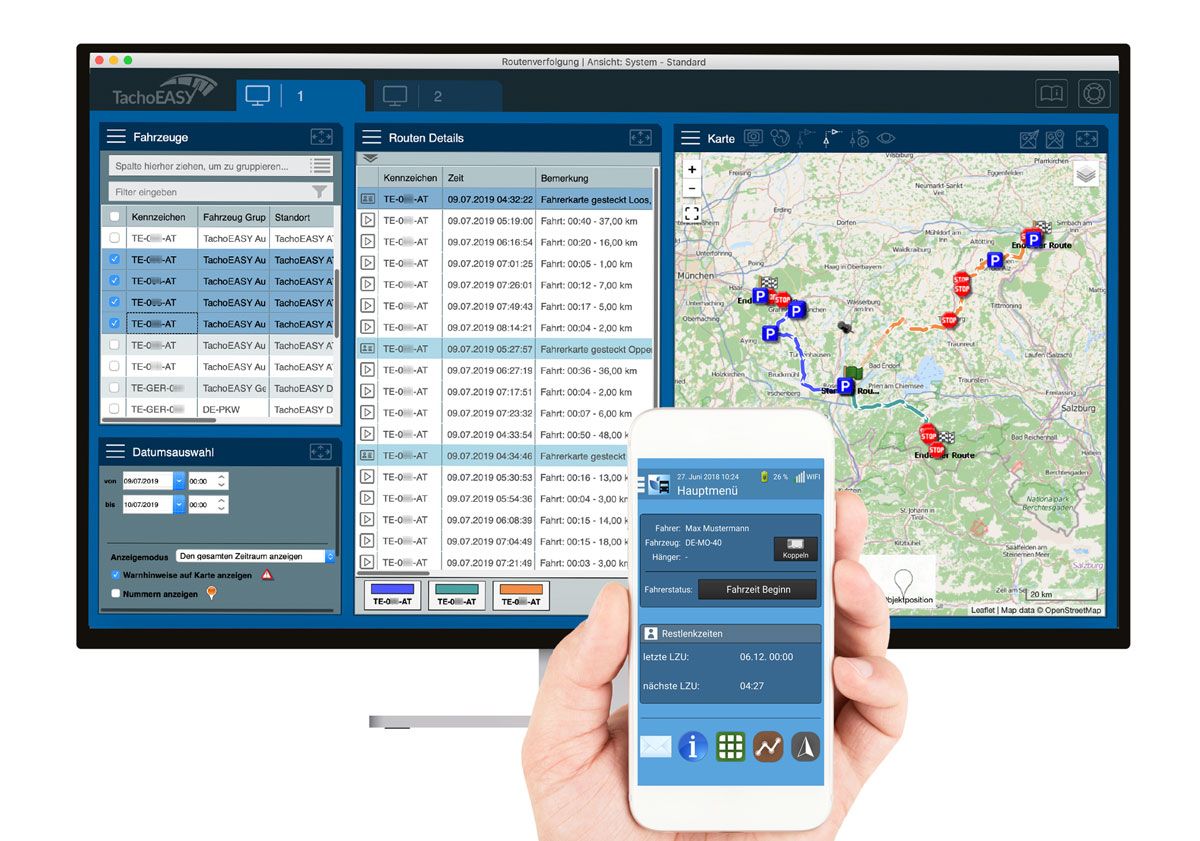 The requirement to offer an additional mobile app as a supplement led to the development of the TEOS® app. This app, also developed with Delphi and FireMonkey, has been available for Android and iOS since 2018. The TEOS® app is used for efficient collaboration and communication between drivers and the company and fits seamlessly into the overall system.

The TachoEASY development team is highly productive with Delphi and the BlueLOGICO framework. This resulted in our having a better product despite a shorter development time, which allowed us to take over a competitor that had not been as efficient in their development before.

The TEOS® system (TachoEasy Operating System) forms the underlying intelligent basis for the telematic networking of fleet, management, and drivers. 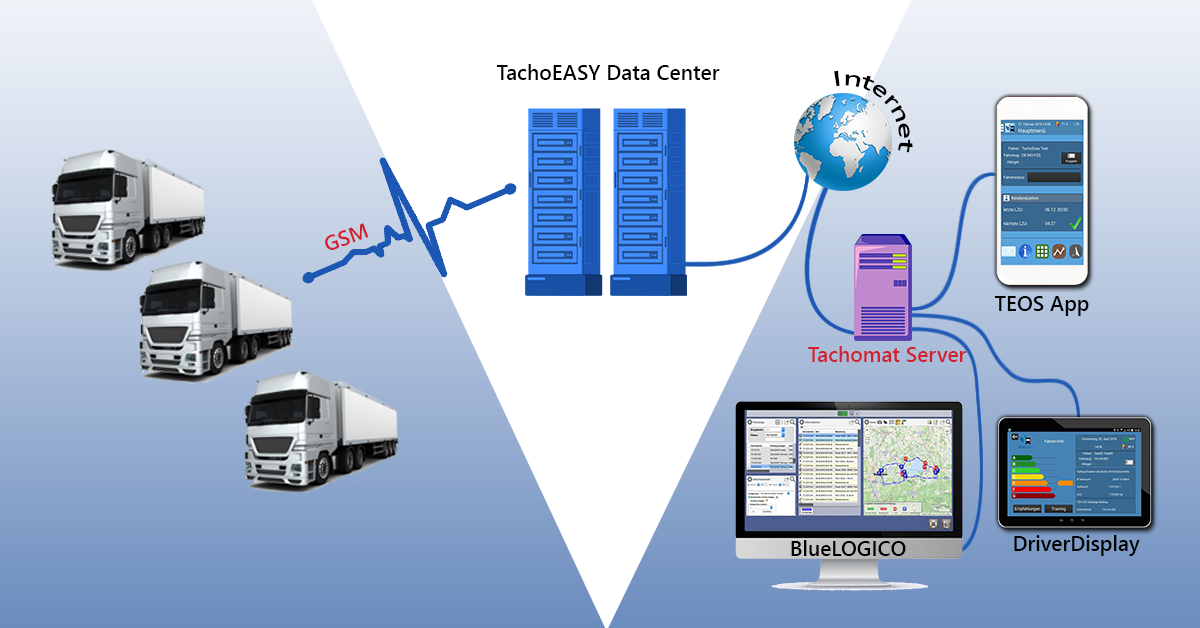 The system topology is divided into three levels:

The company is particularly proud of the independent graphical operating concept and has developed an independent layer in Delphi for this purpose. Object-oriented inheritance has been used to a great extent in this area. For example, the application can be split up into three screens, and specific focus areas can be exposed as "widgets" and operated separately. The application reacts to dependencies of other modules and open windows. 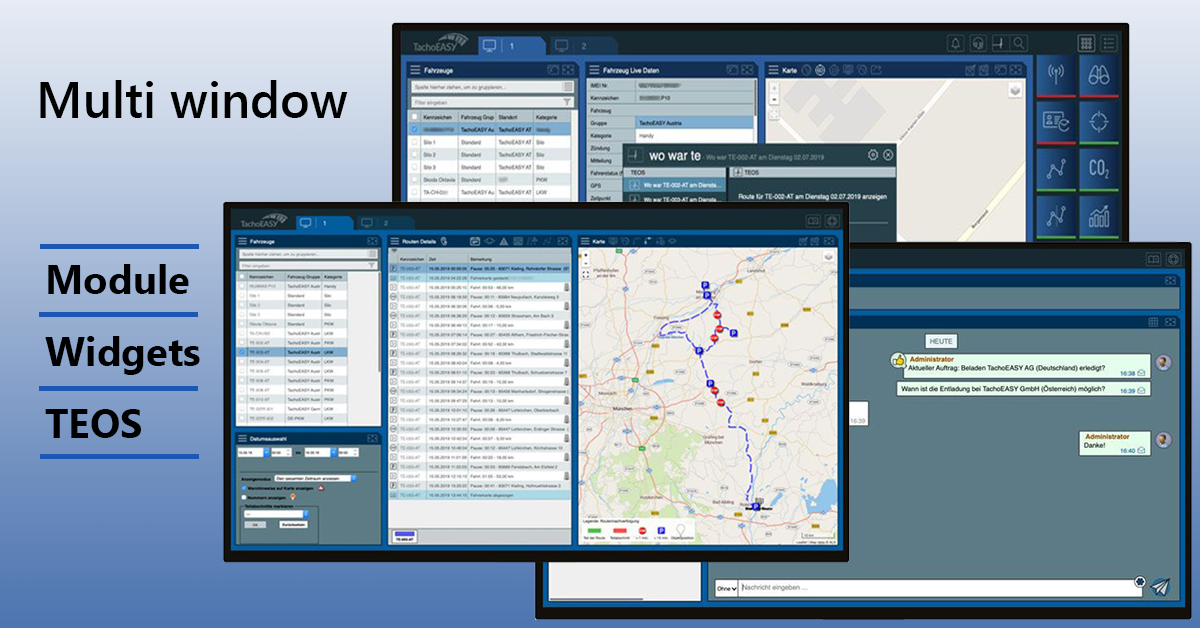 A core function is the highly complex topic of live location. Similar to an air-traffic controller’s monitoring in the tower, the dispatcher can see on the map where a truck is located. From there it is possible to make ad-hoc destination changes; avoid traffic jams; create simulations; monitor legally relevant driving and break times; and track, animate, and document routes. 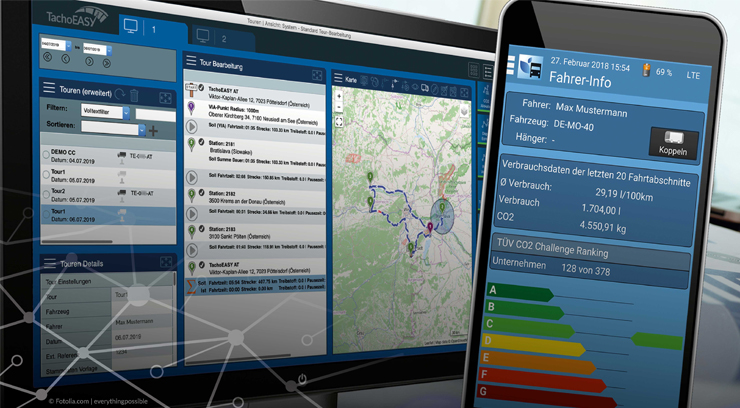 In-vehicle communication takes place via the DriverDisplay, usually an Android tablet with a design similar to that of WhatsApp.

A high degree of automation is achieved through event-triggered actions. For example, freely definable geo-fence actions can be created, a driving style analysis generated, and the carbon footprint determined.

We searched the market for a long time, but we didn't find any other product with which it was possible to do this development that way, with the same code base. There is nothing comparable to Delphi; otherwise, we would have had to develop separately for each operating system.


The tablet enables another special feature. It can be used to create paperless, digital delivery bills with detailed data and digital stamps and, if necessary, return deliveries and photo documentation.

The TEOS® app is the little brother of the DriverDisplay and is available with similar functionality just for mobile devices. However, it has been expanded with functions such as radius search, border crossings, information on toll routes, driver's license checks, and much more.

An often overlooked aspect of the Delphi multiplatform development is the resulting quality control. Sometimes the same code on two platforms gives different results, which leads to detecting your own errors much faster.

During the course of development, various Delphi versions were used. Thanks to the FireMonkey multiplatform framework, the same project and code base were used to develop not only the Windows version but also the macOS version, as well as adaptations for Android and iOS. Almost all required visual and nonvisual components are developed by TachoEASY in Delphi to meet the high standards.

The transportation industry is like Tetris. The faster and more complex transportation cycles become, the more the software must support companies and provide a competitive advantage. By combining desktop, mobile apps, and data access via the web, BlueLOGICO has combined the best of all worlds and, with Delphi, offers a high level of technology security for years.

The vision for the future is to equip the TEOS system with AI-based functions. This will provide drivers with an assistant à la Siri that will familiarize them with the daily activities and tasks at the start of the day. With TachoEASY and Delphi, the right tools are already in hand.

As a self-driving entrepreneur, I am often on the road. I prefer to spend my little free time doing pleasant things and not checking the tachometer. That's why I use the fully automatic remote readout of TachoEASY. The solution automatically loads the driver card and vehicle data and archives them securely on my work PC. This saves a lot of time and helps to comply with legal requirements.